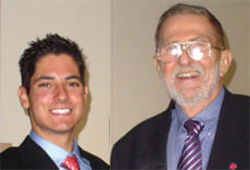 Mr. William N. Beck graduated from Fresno State in 1952 with a degree in business. He went on to great success in wine marketing. He was one of the people who helped the California wine industry's expansion by acquainting people with wine in a variety of ways during the 1960s and '70s.

Mr. Beck wanted to make as big a difference as he could in our students' lives by generously sharing some of what his Fresno State education helped him earn. Upon his death in 2007, we learned that he had left a $100,000 bequest to be added to the Bulldog Pride Scholarship Fund. It is the biggest single gift to an alumni association scholarship endowment at any of the California State University's 23 campuses. As an endowed scholarship, Bill Beck's legacy will encourage Fresno State students to embrace the concept of "Bulldog Pride" forever.