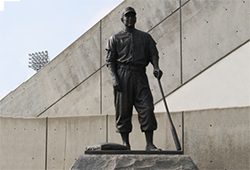 Pete Beiden is a legend in collegiate baseball. Fresno State's stadium is named after the former Bulldog, who guided Fresno State to 600 baseball wins in 21 seasons from 1948 to 1969. Beiden was inducted into the College Baseball Coaches Association Hall of Fame in 1972 and was later honored with a seven-foot statue outside the third base entrance to the campus ballpark. Before his death in 2000, Beiden and his wife Martha established two endowments that now provide annual scholarships for baseball student-athletes and funds for the continual improvement and upgrading of the stadium itself. Combined, the two endowments have now grown to approximately $150,000 over the past twenty years.