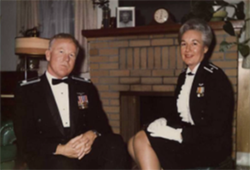 This retired Air Force Colonel attended Fresno State in the 1940s. This remarkable man served in the Army and Navy to finally earn the rank of Colonel in the Air force. Col. Cook wanted to honor his first wife, an Air Force flight nurse who died from exposure to Agent Orange through contact with wounded soldiers coming straight from the war zone in Viet Nam.

He established an endowment to provide forgivable loans to students in Fresno State's Nursing Program. Annual scholarship loans will be forgiven if the student spends two years as a nurse serving in the U.S. military, assisting veterans or helping with Native Americans.

His gifts to the endowment were modest during his lifetime. He died at age 84 on May 7, 2009 and was buried at Arlington National Cemetery with full military honors. His last will and testament and family trust revealed that he had left his entire estate to the endowment. The Colonel Edwin J. Cook and Elvira E Lindholm Cook Endowed Student Loan/Scholarship Fund now exceeds $1 million and will help nursing students for generations to come.